Buy 2 printed plans and a Gee Bee Notecard Set on the same order and get free shipping on the plans.

Digital plan downloads are great, but there’s still nothing like looking over a full-sized plan.

Order at least 2 printed plans (Nallen and/or GAR) and a Gee Bee Notecard Set on the same order and you’ll get free shipping on the plans.

From early years drawing on paper with an Engineer’s rule and No. 2 pencil, to later years with a computer and CAD software

We (Tom Nallen’s) have been designing model airplane plans for nearly 50 years.  From early years drawing on paper with an Engineer’s rule and No. 2 pencil, to later years with a computer and CAD software, model aircraft design has been a constant.  It continues today, and while Tom Sr. has sadly passed, Tom2 will carry forward.

For us, aviation history, scale modeling, and design are equal parts in a creative process.   By making our work available, we hope to help others discover this rewarding form of creative expression and consider designing plans of their own.

A little about the plans on The Gee Bee.com website.  You may notice that some of them are available elsewhere on the Internet free.  This is true – those plans were originally published in various newsletters and then posted to the Internet.  We’ve included some of these plans to offer a complete design series – Gee Bee and related aircraft, for example.  We will not offer any Nallen designs that are currently for sale by other vendors.

We hope to continue to publish construction plans in modeling newsletters and magazines, although few magazines today publish traditional “stick and tissue” designs (topic of a future post).  Many of the plans offered on thegeebee.com are large format and not easily published in newsletters which prefer to include full-sized printed plans in 11 x 17 inch format.

We are particularly excited about the PDF plan download option for Nallen plans on thegeebee.com.  With a lower price, no shipping charges and immediate delivery anywhere in the world, we’re figuring many customers will choose this option.  In addition, PDF plan files are much more efficiently stored and the digital plan can be scaled up or down at the time of printing to meet specific  needs – smaller versions to be flown indoors or on smaller fields, for example.  Adjustments may be required for structural components specified on the plan, but this usually manageable.   As the digital plan download option is reasonably priced, we ask customers NOT to share the file with others.  Please refer them to www.thegeebee.com so they can purchase their own download.  More information can be found in the FAQ (Frequently Asked Questions) on the website.

“He struggled with one hand behind his back to free the parachute.  It finally opened at 500 feet.” 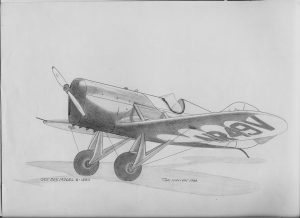 The End of the Gee Bee X

On or about September 12, 1931 Roscoe Brinton, a friend of Lowell Bayles and fellow flyer at the Springfield (MA) Airport, took Bayles’ Gee Bee Model X to the new Brattleboro, VT airport to participate in the dedication festivities.

The Model X’s Cirrus engine had recently been replaced with a six cylinder Fairchild motor which proved to be hard starting in cold weather.  As a precaution, a hand crank booster had been placed loose on the cockpit floor of the X.  According to a Vermont newspaper covering the airport opening, the booster cables had become entangled in the Gee Bee’s joystick as Brinton performed his aerobatic routine and the little airplane flipped on its back unexpectedly.  Normally not a problem, but Brinton hadn’t planned on flying the X inverted, so he hadn’t turned on the gasoline jet required for inverted flight.   Others speculated that Brinton had simply forgotten to  flip the switch before his performance.  In any case, the engine stalled, sending the Gee Bee X into an inverted spin.

In her book Farmers Take Flight, June Granville recounts  that Brinton bailed out of the Model X at 1,000 feet altitude, but his chute failed to open.  After struggling to free the parachute, Brinton finally got it to open at 5oo feet and he landed unhurt on a farm two miles from the airfield.  Upon returning to the airport, he went to the microphone and joked to the crowd: “If you were at the National Air Races, you would have had to pay a big price to see a stunt like that.”

A reporter’s errant match sparked a fire at the crash site and the Gee Bee X burned to a shell.  It’s said that the Brinton family still has a propeller blade from the hulk, but nothing else remains.

Aviation enthusiasts in the Brattleboro area periodically search the site of the old airport for clues to other remnants of the Model X, but the trail is clouded by the near century-long span of time since that final flight.

By all accounts, the  Gee Bee X was a fine flying airplane that fell victim to fate – and perhaps a bit of the carefree exuberance of aviation’s golden age.

When we write to someone, especially in longhand, we say we care 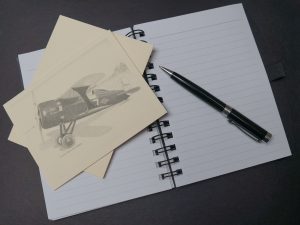 Get a Little Closer

When was the last time you wrote a note to a friend, colleague, or family member?  And no, email doesn’t count.
It’s probably been awhile.

When was the last time you received a handwritten note…one that wasn’t a Birthday or Holiday Greeting Card?
How did it make you feel?

We communicate a lot in today’s world – but are we really saying anything?  When we write to someone, especially in longhand, we say we care enough to take some time to connect one-on-one.
We get a little closer.

We should write more.

Do you love an inspirational story of achievement?  Do you or someone you know love airplanes?   Gee Bee notecards are an elegant way to connect with friends, colleagues and family.

Get a 25% discount on all purchases.

Welcome to WordPress. This is your first post. Edit or delete it, then start writing!

Receive updates on Gee Bee/Aviation History, Aeromodelling, new Plan releases. Get a 20% discount on all purchases.